Browse our media archive to read about news and articles featuring Turbo-Mech.

The company, which recorded RM8.95mil in net profit for the financial year ended Dec 31, 2009 (FY09), would also make the “right investments” with a total fund of RM40mil, he added.

The company intended to distribute growth dividends of not less than 10% of the net profit distributable to shareholders for FY10.

Speaking to reporters after launching the company’s prospectus in conjunction with its listing on the main market of Bursa Malaysia, Gan said the percentage was reasonable, given that it was above the fixed deposit interest rate.

Under its initial public offering (IPO), Turbo-Mech is offering 18.1 million new shares of 50 sen each at an issue price of 63 sen per share. 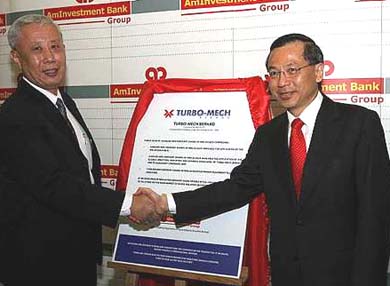 The listing is scheduled for April 30, whereupon the market capitalisation of Turbo-Mech upon listing will be RM68mil, based on its enlarged issued and paid up share capital of 108 million shares.

The offer period for the IPO commenced yesterday and will close on April 20.

Turbo-Mech is expected to raise RM11.38mil from its IPO, of which RM4mil is for business expansion in Indonesia and Thailand, RM4.88mil for working capital and RM2.5mil for estimated listing expenses.

AmInvestment Bank Bhd is the adviser, sole underwriter and sole placement agent for the IPO exercise.

Asked whether Turbo-Mech was looking at new markets, Gan said the company would still focus on South-East Asia for the next three years as there was a lot of potential in the region especially in Vietnam and Indonesia.

“Our focus for the next three years is still on South-East Asia and in Vietnam and Indonesia, as both countries have a lot of oil and gas deposits,” he explained.

Back to Newsroom Back to Top